"Forms of Awareness: Ghillie Suit, is a series that reveals and examines the prevailing set of aesthetic and environmental concerns in North American suburban communities… Through public walks and "un-camouflagings" in city and suburban streets, parks, fields, suburban neighbourhoods, new housing developments and naturalized spaces in urban areas, Ghillie inspires many reactions including fear, awe, confusion, anger, wonder and laughter… The ghillie suit is traditionally used by military snipers and hunters to camouflage the human body, allowing the wearer to blend into various 'natural' landscapes such as woods, prairies and swamplands. As Ghillie, I investigate the shape shifting abilities of the human body… while also questioning our assumptions about gender.” 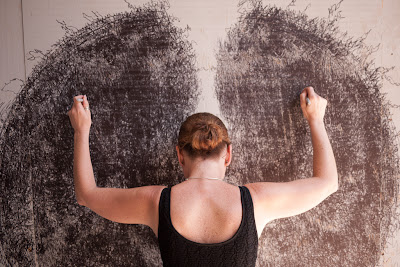 Collette Broeders:  "What I'm currently working on.  Although I have many sort of ongoing projects, my main focus has been performative drawings such as the one you see currently at the one ten windows.  A little about the work follows.

The series of Synchronicity drawings investigate symmetrical, repetitive motion using my body as an instrument to form a rhythmic pattern of line.   I execute the drawing in a hypnotic tempo and meditative state that manifests itself into physical form to unite the viewer with the intimacy of the experience.   The drawings are performed in private and public space and examine the limitations of the body with continuous motion over several hours until a state of exhaustion is reached.

The drawings begin with intense spontaneous gestures within a small space that replicate, synchronize and divide and gradually swell and burst to the outwardly extended body.  Like a cell dividing, the internal self-generating energy of the process is bilaterally and equally distributed as the image grows.  Ultimately, the drawing becomes a study of contrast showing the peaceful-chaotic, soothing-painful and joyful-desperate moments of the performance." 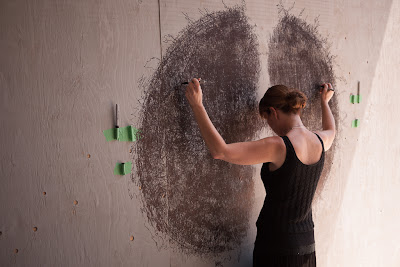 "When we first moved into one ten park, construction immediately began at the apartments above us.  There were several vaults placed within the studio making and scaffolding on the outer building surrounding one ten park.  We decided to make use of the surrounding scaffolding.  Arturo had painted several images that led to the door of one ten park and in July, I completed a synchronicity performance drawing on the scaffolding that allowed the community to engage in the public performance.  The drawing was eventually dismantled by the construction workers and may be in circulation at another construction site which is sort of interesting too!"

Sasha Opeiko
Windsor, ON, Canada
WINDSOR CONTEMPORARY ART is dedicated to contemporary art life in Windsor + area, in relation to the world and art-world at large. It is a selective inquiry into innovative studio practices, and the questioning of challenges that local artists face, as projected through my own interpretations and latent inconsistencies.